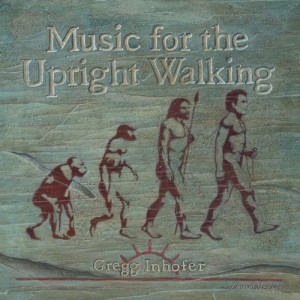 Minneapolis-based singer-songwriter Gregg Inhofer releases second solo album, featuring jazz drums legend Eric Kamau Gravatt.
In 2007 the Minneapolis Star Tribune wrote: “After four decades on the music scene and noteworthy appearances with Bob Dylan, Pepper Fog and Olivia Newton John, Gregg Inhofer emerges as a compelling singer-songwriter with his solo-debut Inside.” Ever since, fans have been waiting for a full-band follow-up. Now it’s here, and what a band it is…
Jazz drums legend Eric Kamau Gravatt joins Gregg Inhofer on his new album Music for the Upright Walking. Gravatt lends his signature explosive style, which had Miles Davis and Wayne Shorter fighting over whom he would play with (It ended up being Shorter, as Eric joined Weather Report). Additional players include Charles Fletcher - known from his blues work with the Lamont Cranston Band, Eric Gales and Willie Murphy - and Dale Strength (Pepper Fog, This Oneness, The Dickins).
Gregg Inhofer is a true music man, reminiscent of Billy Joel or Elton John. The new album offers a collection of 11 hook-filled, personal, witty and sometimes-wondrous original tunes. Plus, there’s a tribute to Jimi Hendrix with a piano-driven rendition of “Manic Depression”. Inhofer’s elastic tenor voice leads through jazz, rock and blues arrangements. From beautifully crafted vocal harmonies (“Problems”), to Saturday Night Live-style saxophone licks (“Let Me Be the One”) and even some spoken-word verses (“Spread the Word”), there’s an entertaining variety of sounds. And whether it’s the mind-boggling polyrhythm of “The Broken Bossa” or the humbling “If I Wore a Hat” - written for friend and fellow-musician Jeff Hill who passed away in 2009 - all of these songs have a fascinating back-story. But what holds the album together is the all-embracing positive vibe. Gregg puts it best himself: “I used to think of myself as a musician. Now, I’m a human being. Music is just something I do. I write songs and try to connect with people in a positive way. That’s exactly what this album and these songs are about.”
Gregg Inhofer has played a significant role in the Minneapolis music scene as an in-demand pianist throughout his career. Most notably, he played keyboards on Bob Dylan’s album Blood on the Tracks, which ranked number 16 on Rolling Stone’s list of the 500 greatest albums of all time. Music for the Upright Walking is Inhofer's second album as a solo artist and is available on October 20, 2011 on iTunes, cdbaby.com and on gregginhofer.com
Album Release concert on Thursday, October 20, 2011 at 7:30 P.M. Gregg Inhofer w/ Eric Kamau Gravatt, Charles Fletcher, Dale Strength and more… $10 Cover Charge Dakota Jazz Club and Restaurant 1010 Nicollet Avenue, Minneapolis, MN 55403, (612) 332-1010, www.dakotacooks.com
Media contact: Lukas Camenzind / 612-615-3559 / This email address is being protected from spambots. You need JavaScript enabled to view it.
Tweet

I'm a singer and songwriter - that's what I do. From recording with Bob Dylan on Blood on the Tracks, to national tours with Olivia Newton-John, I've spent 40+ years doing what I love...

What others are saying...